To Subdue & Rule Well: Rule Over?

“Let us make mankind in our image, in our likeness, so that they may rule over the fish in the sea and the birds in the sky, over the livestock and all the wild animals, and over all the creatures that move along the ground.”

“Be fruitful and increase in number; fill the earth and subdue it. Rule over the fish in the sea and the birds in the sky and over every living creature that moves on the ground.”

Three verses that have wrecked more havoc in their mis-interpretations than, I might argue, any other verses in the Bible. The two words that are the most often mis-interpreted? Subdue & Rule.

Continuing the two-part series we will take a look at the word rule.

What’s the English definition for the word?

a: to exert control, direction, or influence on the passions that rule our minds
b: to exercise control over especially by curbing or restraining, rule a fractious horser, ruled his appetites firmly

a: to exercise authority or power over often harshly or arbitrarily, the speaker ruled the legislature with an iron hand
b: to be preeminent in : DOMINATE

: to determine and declare authoritatively, especially : to command or determine judicially
There are plently of definitions there that I would not want to be the object of.

Once again, to really know the meaning of a word, you have to know its context. For these three verses where and to whom and by whom were these things spoken?

That’s the larger context. What about the sentence structure where it is used?

Rule over the fish in the sea and the birds in the sky and over every living creature that moves on the ground.

Object: fish, birds, every living creature that moves on the ground

Q: Who is doing the ruling and what are they ruling?

A: Adam & Eve told by God to rule the fish, birds, and every living creature that moves on the ground.

What’s the Jewish definition for the word? 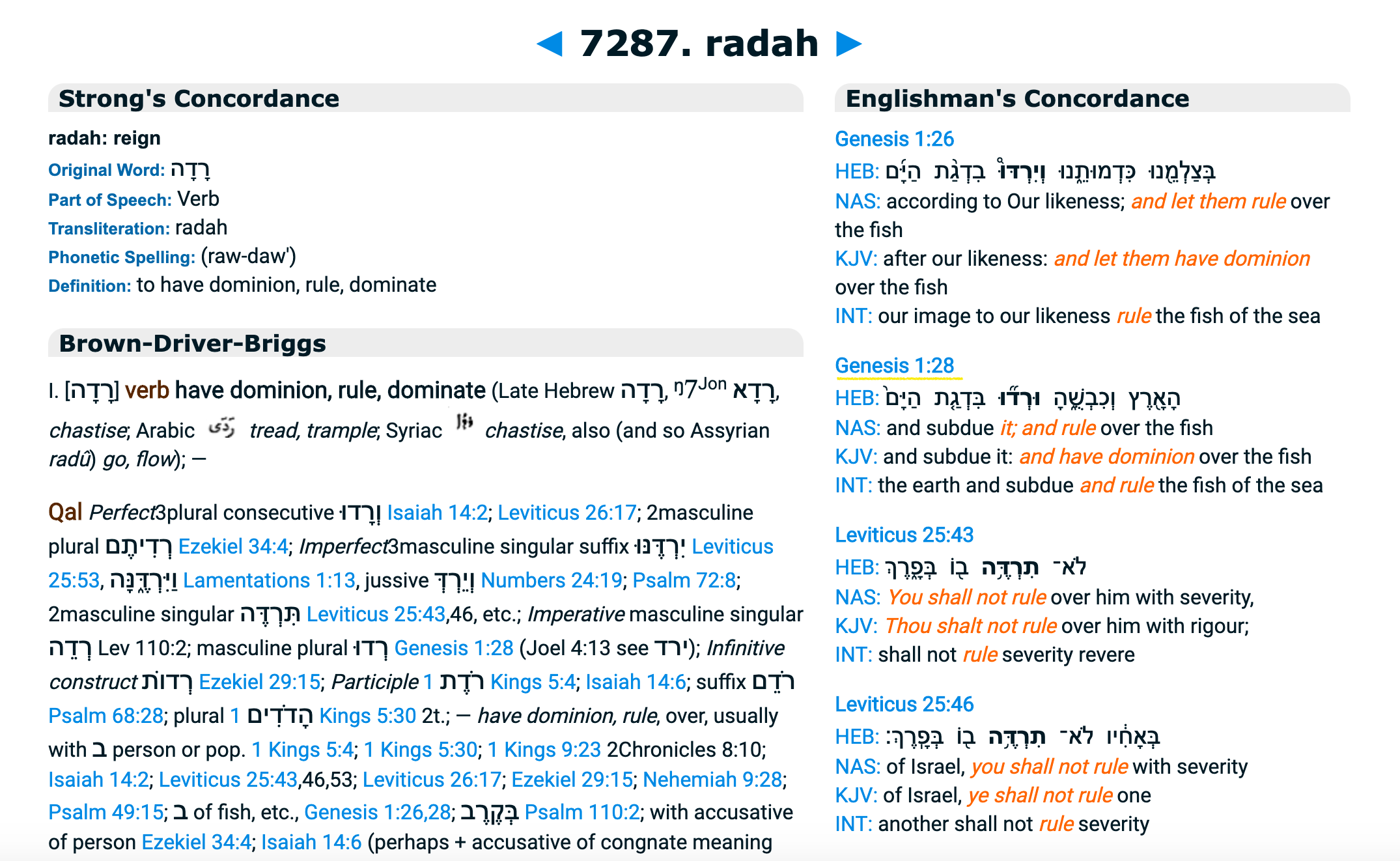 To have dominion, rule, dominate // biblehub.com/str/hebrew/7287.htm

Well, here we see why this word has given us so much trouble when taken out of context. Many translations of the bible translate radah as “have dominion” as well, including the King James Version.

The problems arise when we take the word out of it’s context, out of the story. So, what is the next verses:

Then God said, “I give you every seed-bearing plant on the face of the whole earth and every tree that has fruit with seed in it. They will be yours for food. And to all the beasts of the earth and all the birds in the sky and all the creatures that move along the ground—everything that has the breath of life in it—I give every green plant for food.” And it was so.

God saw all that he had made, and it was very good. And there was evening, and there was morning—the sixth day.

This is a world we do not know. A world where there is no prey and predator.

In my research, I only found one article that mentioned the next few verses. It reminds us that in God’s original, good creation, we didn’t eat each other. That seems to be important. Especially when we are talking about ruling and having dominion (i.e. reigning) over the animals.

So, what type of rule over the animals does God want?

The type of rule that reflects His image. Creation is waiting for that. (Romans 8)

What type of rule over the animals does God not want? Nor over people?

The word of the Lord came to me:  “Son of man, prophesy against the shepherds of Israel; prophesy and say to them:

‘This is what the Sovereign Lord says:

Woe to you shepherds of Israel who only take care of yourselves! Should not shepherds take care of the flock?  You eat the curds, clothe yourselves with the wool and slaughter the choice animals, but you do not take care of the flock. You have not strengthened the weak or healed the sick or bound up the injured. You have not brought back the strays or searched for the lost. You have ruled them harshly and brutally. So they were scattered because there was no shepherd, and when they were scattered they became food for all the wild animals. My sheep wandered over all the mountains and on every high hill. They were scattered over the whole earth, and no one searched or looked for them.

Jesus more than likely referenced this passage in Luke 19:10, “For the Son of Man came to seek and to save the lost.” with a rabbinic technique called Remez.

I highly recommend reading all of Ezekial 34 and Luke 19. I have found it very illuminating and convicting.

I really love this paraphrase of Genesis 1:28:

“Be fruitful and have children, filling the earth with your life so that you can have power to fight against everything in it that leads to death.  Rule with care and fairness over the natural world, over the myriads of My beautiful creatures – from tropical fish to soaring eagles to dogs and cats – every creature that is a part of this living world.” 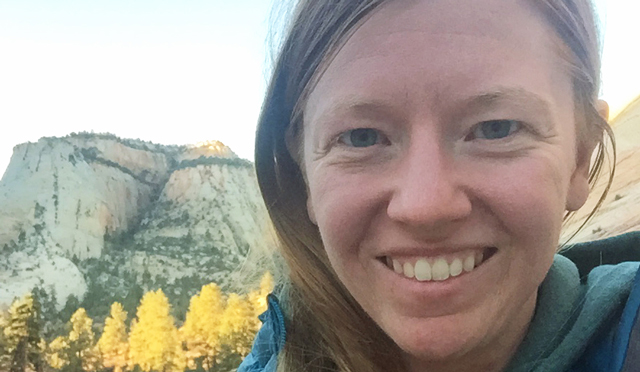 Rachel grew up at a Christian camp surrounded by forest. It was here that she fell in love with God and His wild creation. It was also a place were she could see behind the scenes those who ruled well and those who did not. Hear more about Rachel’s passion for working with SROM.