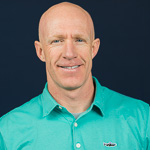 Andrew married Jessica in 2002 on a beach in Mexico with his father as the officiant. They have three amazing children: Isabel Catherine, Sara Marie, and Andrew Flynn. Andrew grew up in the SROM family and culture. As a young boy he began to climb and backpack with his father, mother, uncle, and cousins.  Spending time in God’s creation with people has profoundly shaped who he is and his passions. His life was changed by the grace of Jesus Christ and the love of the Father on Harrower Peak overlooking Titcomb Basin in the Wind River Range on a SROM course in the summer of 1999. Since that encounter Andrew has been passionate and convinced that SROM is a part of the Kingdom of God to change, reach, touch, and equip individuals. Andrew joined the ministry in 1999 as full time staff to help his father, Drew Arnold, who founded SROM. In 2003 Andrew was appointed Executive Director.

Andrew is blessed to serve and lead SROM in a full time capacity as Executive Director.  Jesus invites us to be a disciple and come alongside others to empower them to grow as disciples. In keeping with the rhythms and practices of Jesus to withdraw to outdoor places to connect with the Father and His followers, Andrew believes that SROM provides life changing opportunities for people to grow as lovers and followers of Jesus. You can be apart of the life changing work of SROM and come alongside Andrew in his calling to serve by becoming a financial partner and supporter. Thank you!

Donate online with an electronic check (ACH) or by card.